We have twoÂ cats in permanent residence — oneÂ Japanese Bobtail and one moggie (that’s British for alley cat). 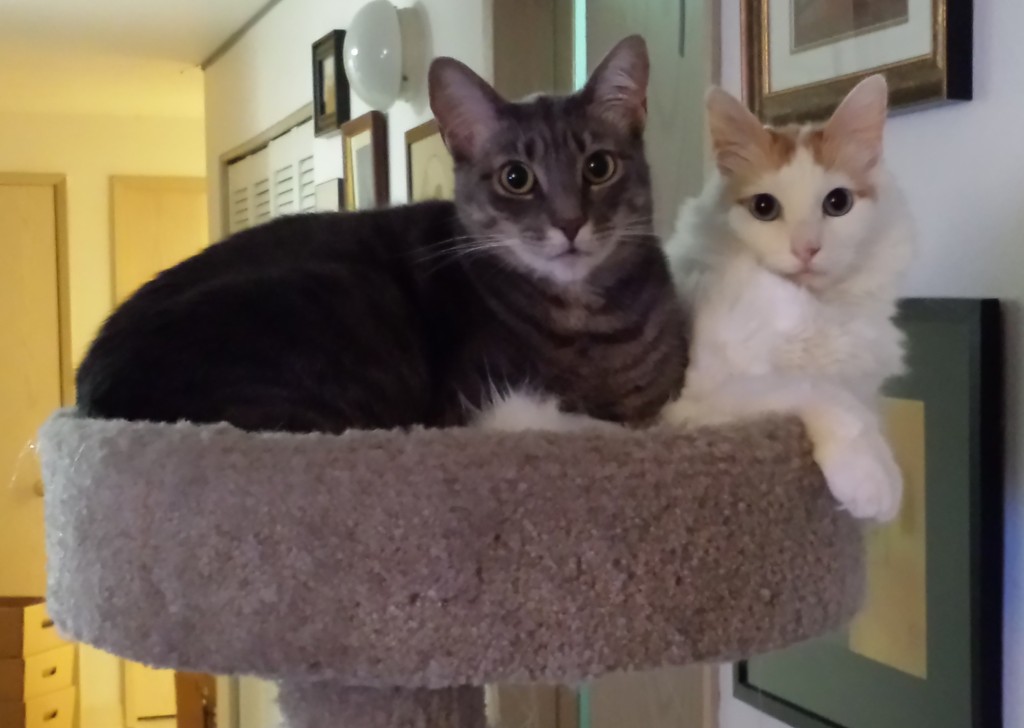 Here they are together: Â Nyssa and Taiho. Â You wouldn’t know it from this picture, but they didn’t start out as friends, and indeed we worried for a while whether they would ever get along. Â They are close to the same age, around five; but Nyssa is a little bit quieter and more introverted, while Taiho is bold, brash, and won’t take no for an answer.

Nyssa was the first arrival. Â We adopted her from the Cat Adoption Team, based in Sherwood, a few miles south of our home in Hillsboro. Â We went in looking for an adult cat, and hoped to find a black cat. Â We learned later that gray tabbies like Nyssa are almost as hard to find homes for as black cats — perhaps because they lack a flashy appearance to get attention. 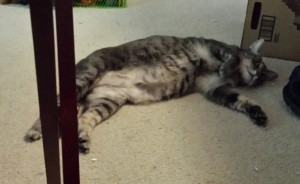 In any case, we were cautioned that she was shy and likely to take a while to warm up to us and feel safe in our home. Â On the contrary, when we let her out of the carrier, she commenced at once to thoroughly investigate everything, then ran laps of the apartment, pausing to look at us now and then with an expression that said, “This is mine? Â All of this is really mine?” Â By the end of the evening she was sitting in the window as if she had always been there. Â She’s still every bit as happy lying about the house today. 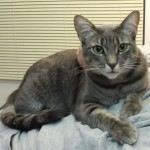 SheÂ is named for a character in Doctor Who, a companion to the Fourth and Fifth Doctors, Nyssa of Traken. Â Like her namesake, Nyssa is a down-to-earth aristocrat, elegantly pretty, intelligent, not particularly bold, but fearless and steadfast in the face of adversity. Her only real weakness (not one she shares with her namesake) is an over-fondness for kibble. Â She likes sitting near us and will now and then insist on being picked up for some serious cuddle time. 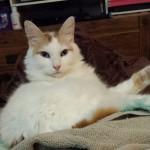 Taiho is a pedigreed Japanese Bobtail. Â Unlike other Bobtails we’ve had before, Taiho is one of the Longhair variety of the breed. Â Longhair JBTs are a naturally occurring variation of their breed, likely evolving in the colder regions of northern Japan. Â Their coat is not as long as a Persian’s, and is rather easier to care for, but does still require some maintenance to avoid matting. Â Luckily for us, Taiho enjoys being brushed!

For even more feline goodness with new pictures every day, visit Cat of the Day and The Daily Kitten!

Quote For the Moment