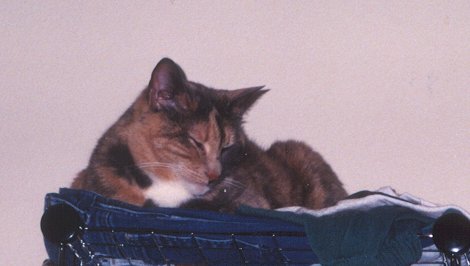 Joe made note of Nita’s passing in his blog, better than I could ever hope to do: Somebody Holds the Key 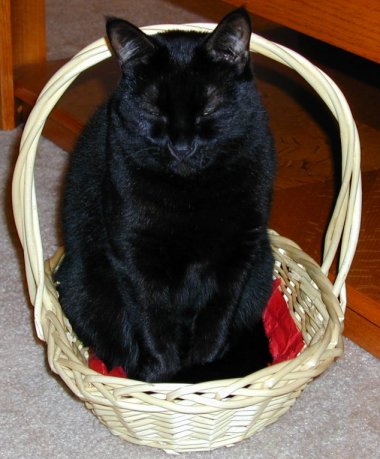 We always said that Lilith was not Joe’s cat, but that Joe was her person. When we met her at the animal shelter, she gave me a friendly look and sniff, then turned to Joe. She ran up his legs, over his lap, planted herself on his chest and started purring and kneading — a ritual she followed for the rest of her life.

She wasn’t, as people often thought, named after the character in “Cheers.” Her name came from the mythical Lilith, about whom we’d been doing some research at the time we adopted the cat. Joe felt that the cat was much like the mythical figure — that she could really be a wonderful and loving person if given half a chance — and so indeed it turned out to be. We also called her “the chirping hellbeast,” because when she needed to say something, she didn’t meow — she chirped. Or squeaked. She was also known as “Godzilla-head” — first, from the rounded shape of her muzzle, which reminded us of that famous Japanese monster; and secondly, the fact that in her younger days, Lilith had a tendency to treat our entire house the way Godzilla treats downtown Tokyo.

She was our security chief, our ten-pound panther; I doubt we will see her like again.

Joe has told her story, in beautiful and complete detail: 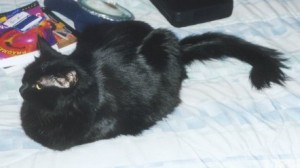 Ariel wasÂ a Domestic Longhair (that is to say, a cat of mixed breed with a lot of fur) who we adopted from the Oregon Humane Society in June of 2000, at the age of seven. She had been sick for several weeks and the shelter could no longer keep her, so we took her in. The folks at the shelter were so grateful that they didn’t have to go through with euthanizing her, they let me take her home without the usual paperwork and fees. Despite the number of cats we already had, I knew that such a sweet, beautiful cat didn’t deserve to die. As Joe said at the time, “Since when was love ever practical?”

At the time, we were still in our apartment, with four cats already in residence, so we tried to find Ariel a new home. But she had apparently had enough of being shuffled around — after a five-day hunger strike, her new owner reluctantly returned her to us. Since we had moved into a new house with more space, she was back for good!

She enjoyed attention, but unlike the other cats, particularly the Bobtails, she wasÂ very low key about requesting it. Generally, when we were sitting in bed in the evenings, Ariel knewÂ it was her time, and cameÂ up to sit between us, patting us very lightly with one paw as if to say, “Hello? Excuse me … ” 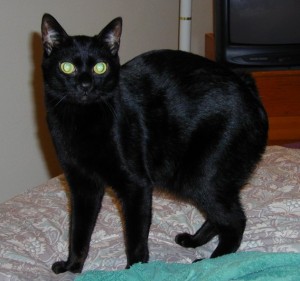 Sailbourne Edogawa Rampo, generally known as Eddie, was born on the evening of July 4, 2001 and never quite got over the shock. He was one of the first litter bred by Sailbourne Cattery, the son of Okamisan, a mi-ke (calico) and Monkey, a solid black. Like his father, Eddie wasÂ solid black; like his mother, he wasÂ very shy and frightened of people.

As the first solid black Bobtail we had bred, we gaveÂ him the name “Edogawa Rampo,” the pen name of Hirai Taro, widely known as the father of the Japanese detective story. “Edogawa Rampo” is how you say “Edgar Allan Poe” in Japanese! (You can findÂ the Wikipedia entry for Edogawa Rampo here. A number of his works haveÂ been translated into English and are great reading.)

As he grewÂ older, he slowly warmed up to us. At first, he would come to us, demanding attention, but only in the bedroom, when we were coming in to sleep. Over the last fewÂ years of his life, he underwent a startling change: climbing all over us, even settlingÂ down in our laps for a bit, anywhere in the house. Only the fact that it wasÂ still very hard to approach him without having him run away keptÂ us from thinking that someone came in the middle of the night and gave us a different cat! 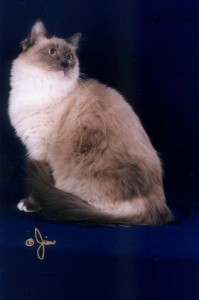 Here’s our first cat, Mina. She adopted us in October 1997 while we were visiting Southern California, recording a story about vampires. She was quite the proper lady in her behavior, so naming her after the heroine of Dracula seemed appropriate. Well, at least we thought she was the proper lady. Turns out that she neglected to tell us that she was in the family way when we took her in, and in December 1997 she had four kittens!

We believe that Mina wasÂ a Birman, a breed which is believed to have risen from temple cats in Asia. Not only didÂ she have the characteristic markings of the breed, but also the fur which though long, doesn’t mat. She also hadÂ the strong will and loyalty to her people and her home which are hallmarks of the Birman breed.

Mina wasÂ always the Queen. No matter how many other cats cameÂ and wentÂ in the house, Mina always tookÂ it in stride, confident in her position that she was in charge. Â Although she projected the classic image of the aloof feline, Mina wasÂ very tuned in to her people’s feelings, maybe more so than any of the other cats. Whenever either of us feltÂ sad or lonely, Mina wasÂ invariably there with a purr to try and help us feel better.

Here he is, Kurisumasu Kyouju Sanjuro (of Sailbourne) — I think he knew he was trouble, even at about eight weeks of age! Kyouju came to us at about 12 weeks old, in June of 1999. He was bred by Marianne Clark of Kurisumasu Cattery in Beavercreek, Oregon. She agreed to sellÂ him to me as an altered show cat, to see if I was interested enough in showing and breeding to really take it on.

When he arrived, he did the first thing any kitten, taken from “home” and dropped into a strange new place, does: go into hiding. He found a hiding place we hadn’t known existed until then … and when we finally managed to coax him out (tuna works wonders), we decided to call him Kyouju — Japanese for “professor,” since he’d seemed so determined to teach us a thing or two. 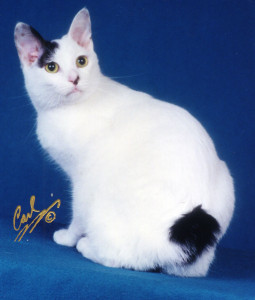 Kyouju was a good show cat, not overly enthusiastic on the judging stand, but not terrified either. I made things a little harder than they had to be, by letting him get a bit fat — something it’s easy to do with Bobtails, especially young ones. Once we got the weight off him, he achieved his CFA Grand Premier title just after his first birthday.

For the rest of his life, Kyouju wasÂ the Number One Bobtail in the house, and a thoroughgoing legend in his own mind. I am often asked whether male or female cats make better pets. Frequently, when it comes to Bobtails, I’ll recommend males. Females have a distinct tendency to be bossy, but with only one exception (see Eddie, above), every JBT male I’ve ever known has been a loving and lovable goofball. Neutering just makes it more so!

Quote For the Moment